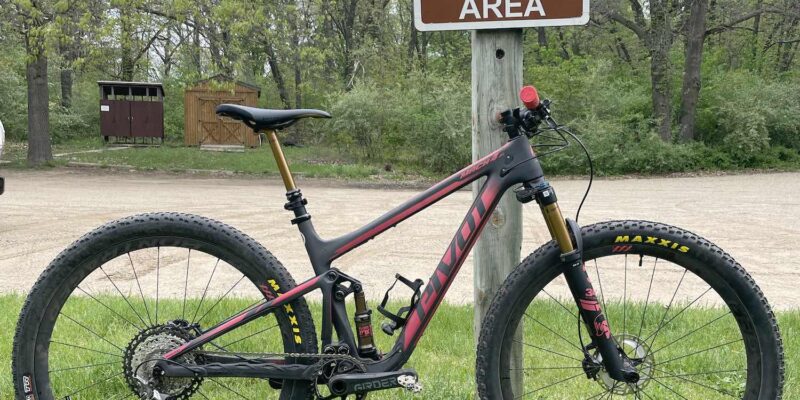 I’ve had a string a really nice bikes like this in a row: an Epic, a Blur, a Hei Hei and now this Pivot. Truthfully, I would still have the Hei Hei had a good friend of the shop not specifically asked to buy it. That was a really great bike. As was the Blur. As was the Epic. I’m a fortunate guy.

Why this one? Just like you, availability plays a role in my purchasing these days. Really hot bikes are hard to get. We had this Pivot on the floor (in the winter) for a couple of months, so I felt pretty comfortable scooping it up.

The Pivot Mach 4 SL Pro XT/XTR is quite a mouthful, and quite a bike. It has 100mm of rear travel, 120mm of fork travel (100mm fork is an option or a simple modification) and a nifty DW Link rear suspension design. I modified this thing before riding it. I have a thing for fancy wheels, so I put some fancy wheels on it. I also installed a carbon crank. I then, to the horror of at least one coworker, removed all of the lockout hardware. I don’t like the cables. I don’t like the cluttered cockpit. I don’t have the brain space to remember to lock and unlock all that stuff; I’m way too busy trying to stay on the trail and keep up with my friends.

As I have it decked out, it weighs around 25 lbs. This is pretty consistent with the Hei Hei and the (VPP-edition) Blur. I like to say that the Pivot has about 100 more bearings than the Hei Hei, so it’s all good.

It’s been a tough spring for mountain biking. I finally took the Pivot for its maiden ride in April, a trip from my house to the Maple Hill Trail for a couple of laps and back home. If I have a signature move at Maple Hill, it’s casing the table tops. Much to my surprise, I cleared a couple on my first trip down. Hmm. The front-end felt like a high-end Fox fork. The rear end felt fantastic, always active but never boggy/saggy/mushy. Fun! Also my first time out, so more riding needed.

Back to Maple Hill a bit later, and the bike continued to impress. “Dang!” thought I, “I need to go somewhere else to see how it feels.” The next day I went to Andrews, which I think has the most variable terrain around. The bike is great! I’m super-duper impressed and pleased with my purchase.

I like the fact that Pivot does one version of the frame: awesome. Most brands give you different carbon layups out of the same molds at varying price points. I suppose that’s cool, but I like the “We do one thing and we do the heck out of it” mentality. OK, yes, there is a downside: there are no inexpensive Pivots.

The DW Link rear suspension is pretty groovy. OK: it’s killer. Granted, it’s been a long, cold, wet season since I last rode the Hei Hei, but at no time did I think, “Oh, I sure miss that 20mm of additional rear travel.” It’s very impressive.