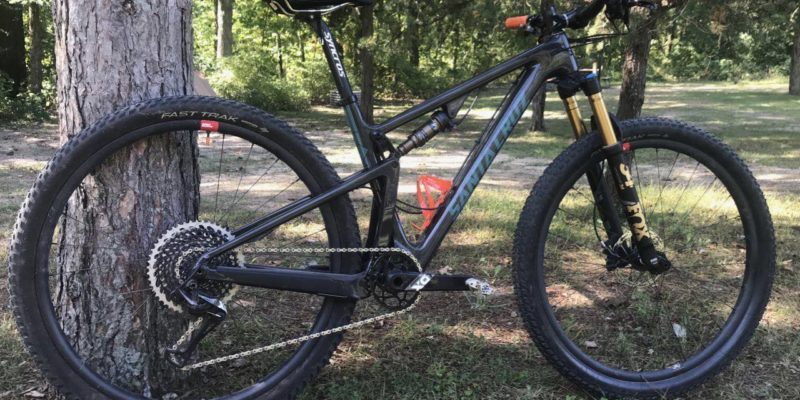 We started carrying Santa Cruz in late April of 2019. We partnered with Santa Cruz for a few reasons. One is that they focus almost entirely on mountain bikes. A second is that they have a large, loyal following. I like their adherence to and constant tinkering with a consistent suspension platform, VPP. All of these things made it not too difficult for us to decide to carry Santa Cruz.

A few years ago, most XC (cross country) bikes sort of scared me to death. They had razor-sharp handling and typically threw me to the ground when my attention wavered for just a moment. I enjoyed mountain biking more while riding more trail-oriented bikes.

Fast forward a few years, and world cup cross-country courses have become significantly more technical and burly. In response, the bikes have become more capable and less sketchy. I bring all this up because you, dear reader (Hi Mom), might be thinking that there’s no way you want a twitchy XC bike. If you haven’t ridden one in the last few years, I recommend that you give one a try. They are sooooooo much fun, whether you plan to race or not.

This bike, the Blur, seems made for the people who mountain bike around these parts. It has 100mm of rear travel and either 100mm or 110mm of front suspension. It has snappy handling, light weight and a variety of build packages. I spent some saddle time on our demo Blur and decided that I should own one.

I had a bunch of parts in my garage, so I ordered a frame. While Santa Cruz generally makes three frames: an aluminum frame and two carbon frames, C (regular) and CC (fancy), the Blur fame is available only in CC, so that’s what I got. Being a patient person, I picked the color that would get to me quickest. I’m not dissatisfied.

Upon receipt of the frame, I installed an X01 drivetrain, a Fox 34 fork, Santa Cruz Reserve 25 wheels that I purchased earlier this summer, SRAM TL brakes, a few odds and ends that I purchased or found hiding in a corner of the shop. It might be worth noting that I’m a little off-script in that I have a 120mm fork on this thing while the stock options offer either 100mm or 110mm options.

Long digression that probably deserves its own post, but too bad. Skip down about three paragraphs if you like. Immediately after Gary Fisher introduced his G2 geometry, nearly every 29er-producer started specifying forks with 51mm of offset, which is the distance between the axle and an imaginary line running through the steering axis. Lately manufacturers have been building bikes with slacker (more “raked out”) geometry. To keep the bikes from steering like a chopper (read: vague), they’ve been using forks with less offset. Santa Cruz is one of these companies.

I initially installed a 51mm offset, 120mm fork on this bike, It worked fine, but was, in fact, a tad vague on turn-in. Once it got into the corner everything was fine, but it was just a tiny bit weird right at the application of steering input.

Fortunately for me, I work with other people who hoard bike parts. J’Son let me try his 120mm fork with less offset. The difference wasn’t quite night and day, but it was definitely noticeable. The bike now feels planted 100% of the time, and J’Son sold me a fork. Long story short: fork offset and frame design go hand in hand.

This is a tremendous bike, but of course it is. This is a very fine frame with a legendary suspension design and lots of nice parts bolted to it. It *ought* to be great. And it is. Really. Honestly. I love it.

We sell fantastic XC bikes, and this is definitely one of em. We’re planning (another) bike shoot-out shortly. Stay tuned.