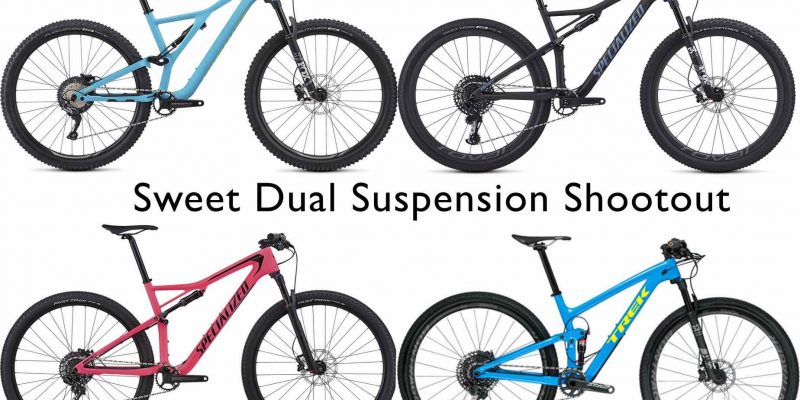 One of the most interesting things — to me — in the shop right now is a trifecta of bikes from Specialized.

The Epic, redesigned for 2018, comes with 100mm of travel front and rear and a 720mm handlebar. This is Specialized’s cross country race bike.

The Epic Evo, new for 2019, is the Epic with four main differences, 120mm of travel up front, a dropper post, a wider handlebar and beefier tires.

The Stumpjumper ST (short travel) 29. This bike is “more” than the Epic. More travel. More tire. More burly. More weight. Built with an emphasis on capability more than outright speed. the Stumpjumper ST looks like a really good fit for that person who wants a dual-suspension bike with great utility and is perhaps not looking to have the “fastest” bike on the planet.

Jonathan’s Trek 2016 Top Fuel 9.8. His bike is bone stock but for a setback seat post and Ergon grips. The Top Fuel allows the rider to adjust the geometry of the bike. J’Son calls this adjustment “Fast or Slow.” I think of more as “Steep or Slack.” One position has a steeper steering head angle and a higher bottom bracket (quicker steering), while the other position make the front end a bit more slack and the BB a tad lower (slower steering, move confident descending). Jonathan’s bike is in low BB position.

My 2018 Specialized Epic Comp Carbon. I’ve messed around with mine a bit, because I cannot help myself. I put on a 750mm bar along with a 12-speed drivetrain and a dropper post from another project.

J’Son’s 2018 S Works Epic has been converted to an Epic Evo. It has the special-offset Fox step cast 34 fork, a dropper and a 750 bar with a shorter stem. J’Son appreciates the finer things in bikes, so of course this thing has really nice Bontrager carbon wheels. Bontrager on a Specialized!!! Get over it.

The Stumpjumber ST 29 is one of our demo bikes, an alloy Comp model with nice Fox components. It’s worth pointing out that the other three bikes are set up tubeless; this one has tubes. And heavy tires.

One of my goals was to focus on the bikes, not suspension setup. It was also important that we all be approximately the same height and weight.

Jonathan’s a 40+ dude who’s been riding bikes forever. He has a good sense of what his likes and what he doesn’t, which is why I invited him to be part of this. Jonathan is a good mountain biker.

J’Son’s not quite 40 and is the fastest of our quartet… probably by a lot. I suspect he can detect things that the other three of us cannot.

Katie is (ahem) quite a bit younger than the rest of us. She’s a college athlete and got into cycling just over a year ago, so she brings a open mind and a good bit of athleticism to the party.

Tim (me) is the oldest of the group at 50+. I’m only OK at mountain biking, and shied away from XC bikes because I didn’t think that I possessed the skills to control one.

This is easy enough. We all got on a bike, rode a section of Custer, and discussed the bike we just rode. Then we switched bikes. I recorded everyone’s comments after each session in order to save time and to keep from writing this mess completely from memory.

Maybe the order in which we rode the bikes counts. In case it does…

Hey! If you take video you can make a movie! Even if you have no idea how to use the video editing software and are too impatient to learn.

A Tiny bit of Background

Bike riding is a pretty big part of the Specialized launch, which I attended in the early fall. The course was steeper and way more burly than those around here. It started off with exceedingly steep two-track, then turned into a long, downhill super-rocky trail. A few years ago a guy said “Don’t slow down. Stay on top of the rocks.” I remembered this and tried my best to keep my speed up.

The first bike I rode out there was an Epic a notch or two up from mine with front and rear Brains. And it was a pretty rough ride. Fun in a masochistic way. Next up was a Stumpjumper ST, and boy was it great, sooooo much more plush and easy on the body. At the time I thought, “Man. This thing is dynamite out here. I can’t wait to see how it feels at home.” If you watched all 7 minutes 24 seconds of the poorly recorded and edited movie, you’d notice that everyone was super impressed with the Stumpjumper 29.

What Our Testers Would Buy

Katie would purchase an Epic Evo due to the way it handles. This is pretty funny, because she was all over (and off) the trail for the first quarter mile on that bike, no doubt because she’d ridden the Stumpjumper immediately beforehand. However, once she got used to how much quicker the Epic was, she was super steady and moving fast.

J’Son likes his bike (the Epic Evo) best, but he’s pretty quick to point out that you do not need to have the megabuxx S Works frame to have a pile of fun.

I’ve been chewing this over ever since we finished. I liked all of the bikes, and any of ’em would be a platform upon which I could build a bike that would make me very happy. I remain exceedingly pleased with my Epic. Sure. I lust for carbon wheels. Yes. I might be thinking about a 120mm fork.

Is There a Conclusion?

If I could build a bike that would make me happy out of any of these bikes, which one should you buy? First, I’d think about what you really, deep in your fully-examined heart, want. Is it speed? That’s an Epic or a Top Fuel. Is it a speedy bike that you can ride here, Brown County or Marquette? That’s maybe an Epic Evo. Is it something more plush? Do you want a bike that you can take to the Front Range or just about anywhere else? Man, that Stumpjumper ST is really something. If one of them particularly speaks to you, and the Epic totally spoke to me, that’s probably the right answer. It’s all about fun, right?