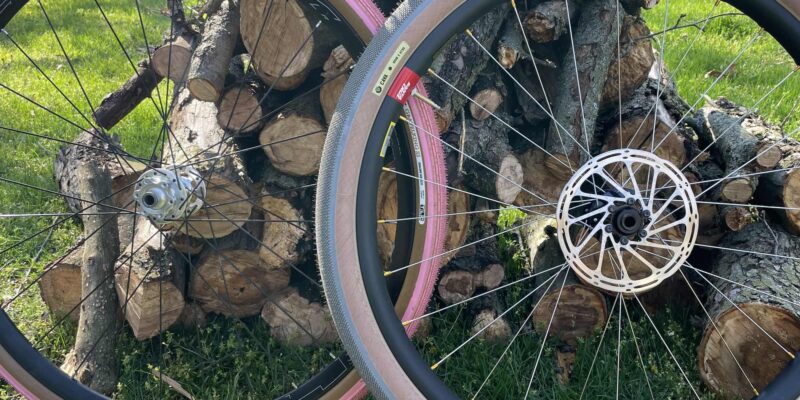 I purchased a new gravel bike this winter. Checkpoint aluminum frame. Rival 1x drivetrain. Mostly parts that we laying around the shop and wheels that I’ve had for about seven years: Chris King hubs, HED Belgian rims and fancy Sapim spokes.

But I’m really into what the kids call Gravel Plus: 650b wheels with 48mm wide tires. I looked around for pre-built wheels for a good while, but there was nothing to be found. Then, one magical day, a supplier opened their secret closet containing a bunch of awesome carbon rims, and I bought two. Then I fished around for hubs. Then I waited a long while for them to appear. I the meantime I bought some spokes and crazy tires.

I’d been aware of Ultradynamico for a while, but after watching this video, I really wanted to own a pair of their tires. This was my chance.

Everything came in last week, and Matt assembled the wheels. Saturday after work I weighed the bike, swapped out the wheels and tires, then weighed it again. Two ounce gain. What!?

If you want a light something — bike, wheels, drivetrain, whatever — all of the participating components have to be really light. I didn’t get the lightest hubs for my new wheels because they wouldn’t have been available for months. I didn’t get the lightest spokes because they wouldn’t be available for months. As a result of my decisions to prioritize delivery over weight, the weight is a little higher. And I’m super cool with that because I’ve actually ridden on these wheels, which I prefer to imagining riding on some wheels that might become available in the future.

There are three takeaways from this experience: