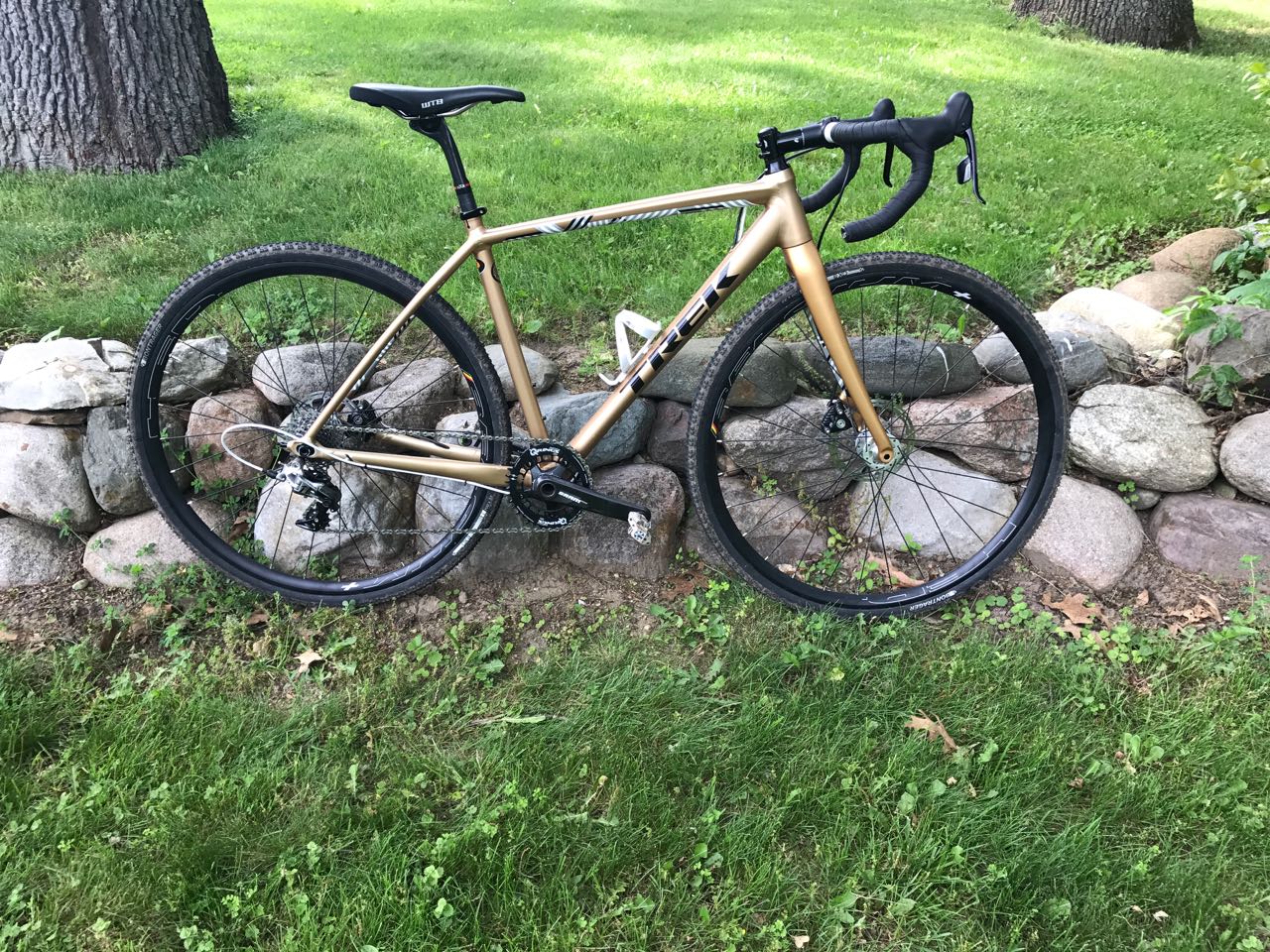 Yes. I know. I, too, have every confidence that I’m the zillionth 50+ white dude to purchase a Crockett and name it “Sonny.” In this regard my lack of originality bothers me not at all. I can’t help that “Miami Vice” was required Friday night viewing for a while during my college years. That kinda thing sticks with you.

This project started with the guy 2nd from the right; the one who doesn’t work at Pedal.

He’s Sven Nys and he’s the Real Deal on a cyclocross bike. Last fall, Trek built him a one-off, single-speed bike to race at the Single Speed Cyclocross World Championship in Portland. Check out the link. That’s a pretty darn spiffy bike. So much so that I quipped to my Trek rep, “Hey. I’ll be the first guy to buy one of those if you build it.”

A couple of months ago Trek introduced the new Crockett, which looks a whole lot like Sven’s bike. Seconds later came an email from my Trek rep reminding me of my message. Sigh.

What really attracted me to this bike were the horizontal dropouts and the ability to run either geared or single speed. My current (at the time) SSCX bike had an eccentric bottom bracket and absolutely no provisions for gears. While this is marvelous from a purity of purpose standpoint, I never really warmed up to the eccentric, not that I’m a guy who changes gearing all the time.

The other thing on my mind is the versatility of cross/gravel/adventure bikes. This piece sums it up pretty well, but it leaves out something a little bit important, cost. I’ve got a fair number of dollars wrapped up in my carbon Jake, so it’s not the bike I reach for to ride in the slop or on roads that might still have salt on ’em. I had kinda hoped that this bike, Sonny, might be a less expensive version of my Jake.

I would have been smartest to purchase a stock Crockett 5 and be done with everything. Boom! Done! Dollars saved! But I opted to build up a frame because I already had “everything else.” I did this full well knowing that a bare frame lends itself to scope creep and unforeseen compatibility issues. In this instance I learned that none of my brakes would fit this frame, that I would have to modify a set of wheels to fit this frame and that I might as well put gears on the bike.

This frame is designed around flat mount brakes, which are a new standard or bunch of marketing BS that was started by Shimano and later endorsed by SRAM. Are flat mount brakes functionally different from post or I.S. mount brakes? Nope. They just have a different mounting strategy. This sort of thing gets me a little hot with the bike industry. Change for better is great. Change for the sake of change isn’t just unnecessary, it’s wasteful. In my particular case, I couldn’t run a 140mm rear rotor using a post-mount caliper and a flat-to-post-mount adapter due to frame clearance issues. <tooth grinding sound>

In the end I purchased a set of flat-mount Shimano calipers and got what I wanted. Why Shimano calipers? Because they were the *only* thing I could find. Sure, TRP and others say that they make flat mount calipers, but they’re not actually available for purchase yet. I’m still a little bit bent over this, but I’m happy to have a resolution. I’m also happy that these Shimano calipers appear to work pretty darn well.

The above picture illustrates something that I tried to account for, but that proved to be a bigger deal than I expected. Unlike (expletive) flat mount brakes, I think through axles are an improvement over quick-release skewers; they (at least in theory) make for a stiffer bike, and there’s pretty much zero probability of extreme braking forces levering a wheel out of the dropouts.

When I started this project, I’d planned to convert an older set of HED Ardennes+ disk wheels. Alas, the hubs on those wheels predate the concept of thru-axles on cross bikes, so they’re now on the (quick release compatible) Jake and the Jake’s wheels — HED rims and Chris King hubs —  were converted for this bike. It’s hardly the worst thing in the world, but it’s not cheap to convert King hubs.

I suspected from the start that I’d put gears on this thing, which required the purchase of Rival 1×11 shifters and a derailleur (I had a cassette). Non-nerds should probably skip this next bit. It’s involved and maybe dumb.

Things get weird concerning the front chainring. Parts I had on hand included:

On the road, things looked less OK. The chainring was all over the place, lots of lateral movement that looked different and more awful than the strange motions of the oval chainring. It took me a while to figure out the problem: the 110 bcd spider did not sit flat on the carbon crank arm. This presented a few options. I could purchase a 1x-compatible chainring to fit my 130 BCD spider, but I wouldn’t be able to try the Q ring. I could purchase a new crank, but that just seemed excessive and expensive. I could purchase a different bottom bracket to make the BB30 crank work, but I was pretty darn keen on the carbon crank. So I got out the dremel tool and a grinding bit, and I went to work. It took a little while and a lot of noise, but the finished product works well.

The finished bike is great. The geometry is nearly identical to its predecessor in my stable, so I’m very happy with the fit. The jury is out on the Q ring; time will tell. The new brakes are nice. Rival 1×11, to me, is about as good as it gets — it’s not too expensive, and it works like a champ. Many other aspects, the wheels, the bar, the saddle and seat post, are old friends, and I’m happy to be using them again.

Trek did a lot of good things with this frame. I like the option to run single-speed. I like the clearance for 40mm tires. I like the geometry. I’m not a fan of internal cables; I think they complicate matters quite a lot while offering almost nothing in return. Cabling this bike was fussier than some, but not as awful as others.

The gold frame is contentious. During the bike’s construction phase, my wife came in the house one evening and asked, “What’s that ugly bike in the garage?” Beauty is indeed in the eye of the beholder.