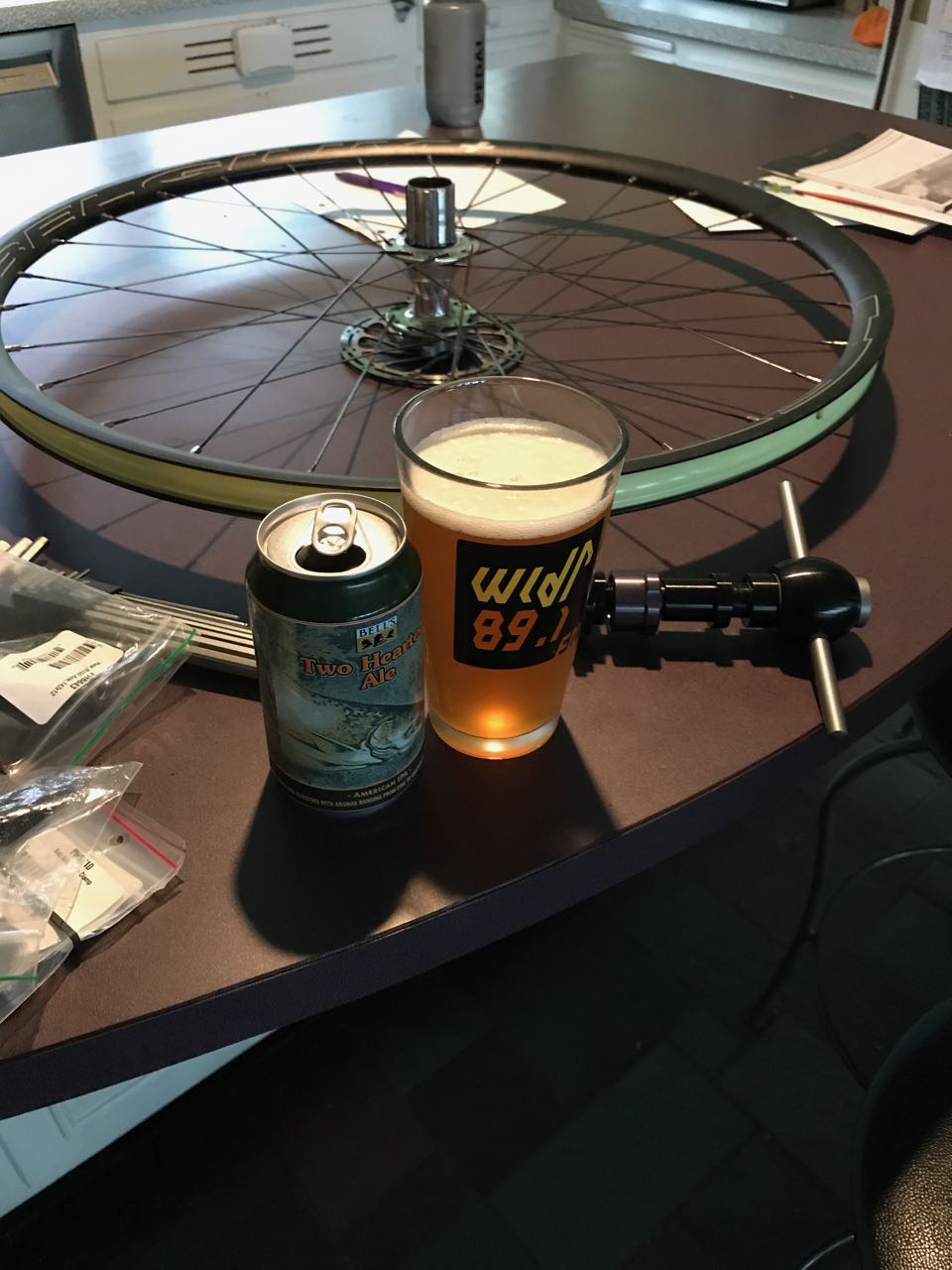 I’m working on a super top secret project, part of which entails converting a set of hubs from quick release to 12mm thru axle. The hubs in question are Chris King R45 disks which I purchased a couple of years ago for the Wonder Jake.

My project is a great case in point. For many (many!) hubs in the word, a conversion between QR and thru axle would cost me about fifteen bucks and fifteen minutes of time. Not this. Both hubs had to be rebuilt with new axles at no small cost. OK. Fine. Order it up. (It’s only fair to note that I’m reworking these wheels because my other (older) favorite wheels just will not convert to 12mm thru axle. So while I might be complaining about it, at least it’s possible.) The parts arrived, and I went to my garage for a quick swap. But it wasn’t. For the front wheel, my old preload adjuster wouldn’t fit the new axle. For the rear: ugh.

I’m working with a series one R45 disk hub, which is something of a PITA to take apart. However, I prevailed and it all came apart as it should, but for a bearing stuck to the QR axle. No problem, except the bearing needed to be installed on the new thru axle. I threw all the (pitiful) muscle I could at the bearing, but it wouldn’t move. Maybe I need to use muscle building products for muscle strength. I took it to the shop with me the next morning and found a socket that fit the ID pretty well. I smote the contraption with a hammer and things blew apart. A nearby mechanic yelped as little ball bearings few everywhere.

And, yeah, I found all of the balls but one. Ugh. I called King later in the day. Turns out that:

So I bought a bearing, an adjuster and a tool, which arrived today. I carted it home after work and got down to business.

Here we see, from left to right, some bags of parts, an appropriate social lubricant, a vessel for same, the new hub tool and the patient waiting patiently in the background.

Here’s a collection of lubricants: waterproof grease I’ve had for years, spray Tri-Flow, Chris King Ring Drive Lube and a container of Dumonde Tech MR Grease. Why not?

OMG! That little bearing just popped right out of there! It felt great, so I left it alone.

This is the guts of the hub, from drive side to non-drive side: drive shell (as King refers to a free hub body), the big bearing, the ring drive, the spring, the spring retainer, the seal and the little bearing. Was I marginally anxious to get all of this buttoned back up before the missus saw it on the kitchen counter? I was. Did I? No. I did not.

The big bearing felt kind of crappy, so I rebuilt it. Herein lies the King Conundrum. The bearings are made really, really well to be really, really great, but they require a good amount of service. Getting this single bearing to this stage of operation was some slow, tedious work. And there are three major bearings in the rear hub. Of the other two, one felt fine and the other (as close readers may recall) was (somewhat tempestuously) destroyed early in the process and was replaced with a new item. Jeepers!

But it all went together just fine, and I’m happy. This is a wheel set that I love. Love the hubs. Love the rims. Love the spokes. Gonna put ’em on a (top secret project) bike and ride ’em a few more years. Nice. But it was not without expenses in the time and money departments.

When it was all back together and the bad language was put away for the evening, I apologized to my wife for having a bunch of greasy stuff strewn all over the kitchen when she came home. “Oh. I don’t really care,” she said. “It looked like you were having fun.”