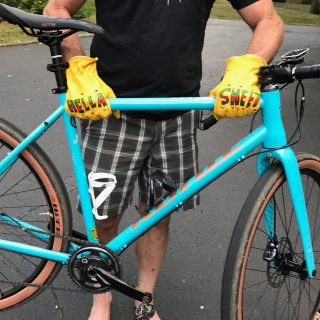 Just a few short years ago we all raced local gravel races on our cyclocross bikes or perhaps our 29ers. As longer races became a thing across our country, we saw three things occur to create the new and exciting (some snark intended) category of Gravel Bike:

The UCI (bless them) limits the width of cyclocross tires to 33mm, so many cross-specific frames weren’t ready for customers who wanted to stick wide gravel tires on their rims. At Pedal we experienced a few instances in which a person’s desired tire just wouldn’t fit their frame. Bummer. BUT: those customers had bikes that were optimized (one assumes, right?) for a 700×33 tire. Would the performance be as good with a 700×40 on there? How do we measure “as good?”

On these very pages I have argued against the thin-slicing of bikes vis-a-vis gravel vs. cross vs. adventure (to a lesser extent). Let’s say that I argued that you don’t have to slice stuff too fine. And yet: what of specificity? What of a tool designed to do a singular job? What does it look like?

I recently became involved in a protracted discussion debating gravel wheels: 650b vs 700c. During the conversation I wondered aloud which would be lighter, as that would probably be a significant factor in one’s choice. Once I figured out that my discussion partners weren’t going to take the bait and give me empirical data, I waded into spec sheets.

I put Stan’s Valors on my NRB. Those things are stupid light and dropped the weight of my bike by an appreciable amount. What would I use for 700c wheels? Zipp 303s? Stan’s Valors or Avions? Ardennes? So I made myself a little chart:

What are the tires? I used a WTB Riddler in 700×37 for the 700 rims and a WTB Horizon 650×47 for the smaller wheels. I chose these tires because they’re in my garage and seem like very reasonable options. I didn’t include rotors, valves, cassettes and all that jive, because they’d be common to all of the systems.

The chart shows that, from a weight perspective, there is little to no penalty for the 650 setup, which was maybe not intuitively obvious, with those super-wide tires. That’s nice. Which one rolls better? I don’t know, but I sort of know how you compute such things, and it’s not impossible that it’ll become a winter project.

Which one handles better? I reckon anything can handle just fine if the bike is designed for it, but what I’m trying to explore (theoretically for sure) is this: given a single frame, what works good in that frame? Let’s start with another chart, for which I took the formula used here: an assumption that tires are round, so the diameter of the wheel and tire system = ISO rim diameter (622 for 700c, 584 for 650b) + 2 x tire width. Radius is half diameter. Circumference is pi times diameter = 2*pi*radius.

One of the things I’ve heard once or twice is that a 650b x 47 setup has about the same circumference as a 700 x 30 setup. The chart above bears this out. And here’s where things get interesting from an optimization standpoint. If a CX frame is optimized around a 700×33 setup, a a 650 x 47 setup will mean that the bike sits 5mm closer to the ground. If that same bike opts for a 700×40 setup, the bike sits 7mm further from the ground. Are these differences (12mm from smallest to largest radius) significant?

Let’s assume that frame designers know more than me, which seems fair. I once again hit the world of specifications for bikes that fit this gravel/adventure/etc. category and fit me. Voila!

Yes! I did leave out a lot of geometric data. Mostly I was interested in three things: fit (this is mostly stack and reach), bottom bracket drop and chain stay length. That said…

Generally I see a lot of similarity. Bottom bracket drop is very consistent with the Moots CX bike on the high end and the Domane and Diverge on the low side. Everybody else hovers around a very traditional 7 cm of drop. Similarly, chain stay length is pretty darn consistent. The Routt 45 has the longest at 450 mm and the 3T has the shortest at 415 mm.  Speaking of which, the 3T and OPEN bikes were included in this chart because they’ve come up in conversation in recent weeks, and I was curious how they matched up with bikes that we stock.

From a fit perspective, many of the bikes cluster around what I would call traditional cyclocross fit — bars a bit higher than road race fit, but still pretty athletic. The Domane, Diverge and especially Routt 45 are quite short, while the Konas are a little bit longer. I recently ordered a PsychoX RSL instead of a Routt due to the fit numbers. It’ll be here soon, and we’ll see what this high bottom bracket is all about.

For better or worse, this post has mostly been an exploration with you, dear reader, along for the ride. I’m not sure if my hypothesis was “Bikes are more similar than you might think,” or “Bikes aren’t as similar as you might think.” I didn’t really have a strong opinion, but I sure was curious. After collecting this data, I’d say that they’re pretty similar. Based on conversations in the shop and in this hunk of research, manufacturers aren’t publishing a piece of data that consumers really want: tire clearance.

Other than the charts and hard data contained herein, all I have is anecdotal evidence. When skinny tires were cool, I ran 700×23 tires on my cross bike and (gasp) liked it. I ran 700×40 tires on a different cross bike and (!!!) loved it. I love my NRB, and the tires are an enormous amount of the appeal. I guess I remain convinced that a cyclocross bike is a really versatile piece of hardware, especially if can handle a pretty wide tire.