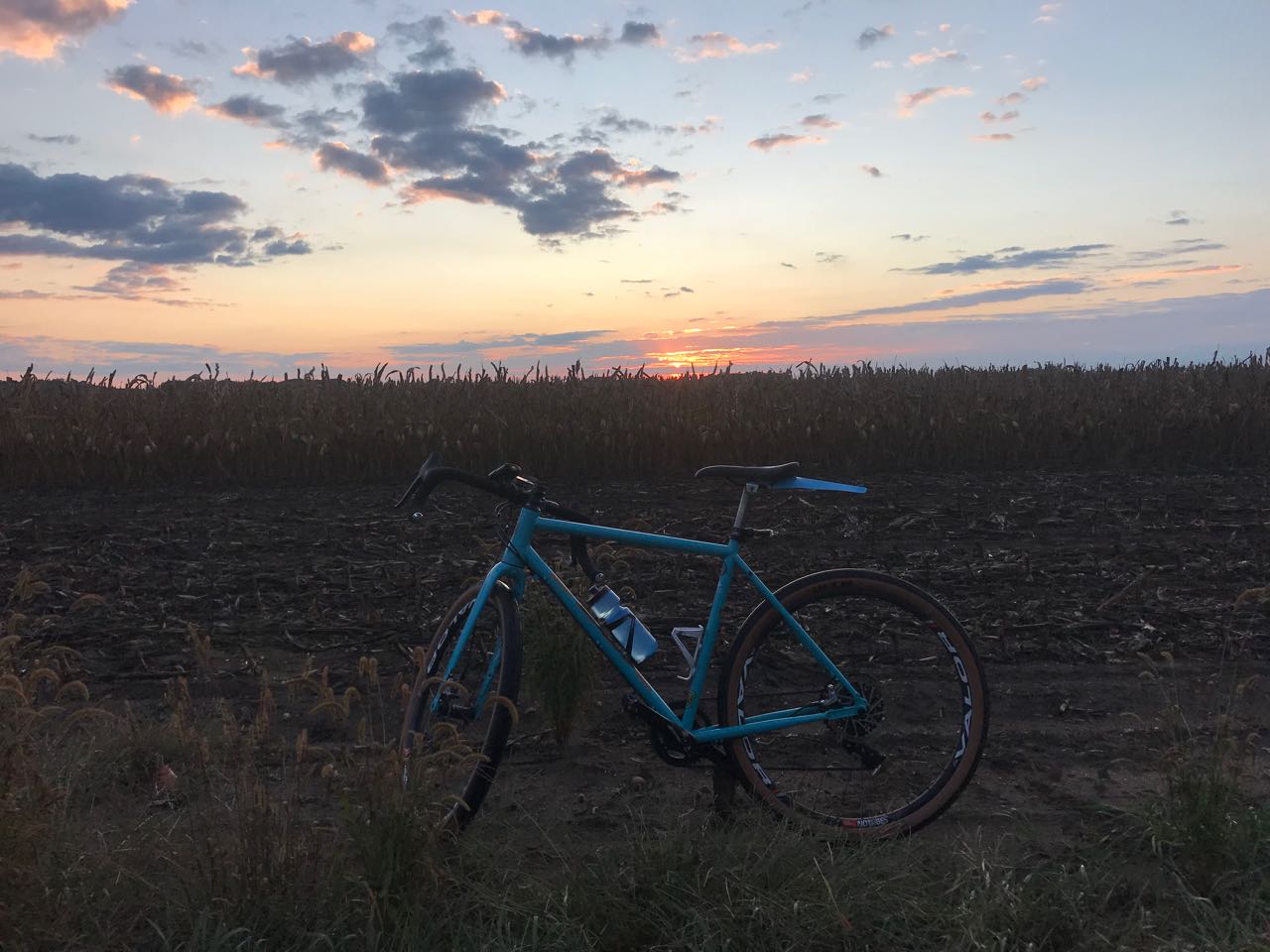 In something of a time warp, I found myself in my basement on a bike on a trainer with Coach Troy Jacobson yelling gear ratios at me via a Spinnervals workout that I’ve had for years. I felt like I was 40 again. Sort of. Regardless, this workout predates the widespread use of power meters, so Coach Troy works with gear ratios, heart rate and cadence. The gear ratios are based on a full-size road double (53/39) and a 12-25 cassette. I was riding a bike with a single chainring and 11 gears in the back. I found myself doing lots of (admittedly, pretty straightforward) math in my head, and so it was that I began thinking seriously about range on a modern single-ring setup.

Pease note: as with most things related to this blog-o-rama, this is not an exhaustive treatise. Sure, it may be exhausting to read, but I don’t pretend to cover everything, only the stuff that interests me. In this case, we’re talking about the gear ratios found on a road bike from the era of Spinnervals 2.0 compared to a modern 1x drivetrain with a wide-range cassette.

As we watched mountain biking go from three rings, to two rings, to one ring, the word we heard over and over was “range.” “How much range do I lose when I have fewer front chainrings?” And I’m gonna be honest, our usual answer was “Not much,” but maybe we don’t always do a terrific job of quantifying that answer.

A standard road double has rings of 53 teeth on the big ring and 39 teeth on the smaller. In shorthand, this is referred to as 53/39. A triple is 52/39/30. Ten years ago, the cassette paired with these cranks would have been 12-25. Approximately a decade ago, compact cranks entered the scene with 50/34 gearing and, cleverly, an 11-25 cassette. 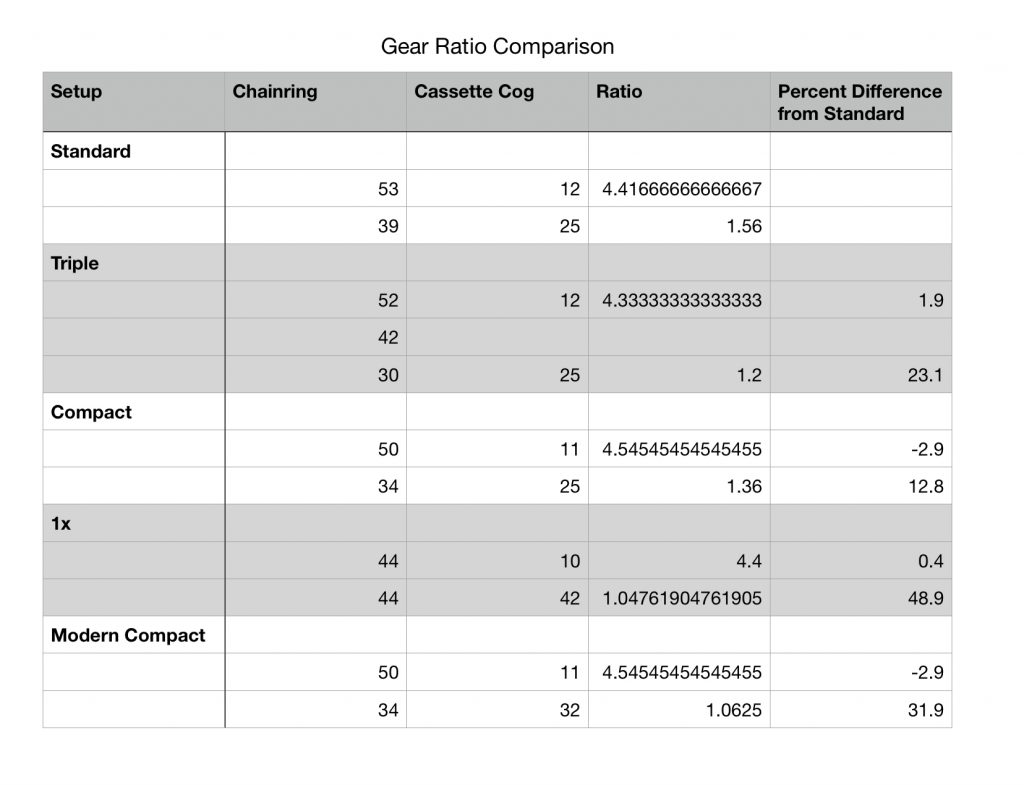 So. Looks like range is pretty well covered. It is at this point that your good friend with many miles under her belt will declare: gear spacing! Behold:As is very evident, your good friend is correct. (As is also evident, I’m pretty terrible at formatting this spreadsheet junk.) The steps between gears *are* bigger on the wide-range cassette than an old-timey 9-speed 12-25. The big question here is: is this a big deal to you? Speaking oh so personally, it can be a pretty big deal if you find yourself primarily in the smallest cogs of your wide-range cassette. That 20% difference between the 12- and 10-tooth cog is, ummmm, a lot, a big jump. My bike started with a 40-tooth front ring combined with the 10-42 cassette in the back, and I found myself in the 10-tooth cog more than I liked. I replaced the 40 with a 44 and am much happier. A nearly interesting fact is that I’ve run a 40-tooth ring with a closer-ratio (11-28) cassette several times in the past and never minded the fact that I was regularly jumping between the 11- and 12-tooth cog regularly. It goes without saying (but here it is!) that I gave up a TON of range with that 11-28 cassette compared with 10-42.

Shall we wind this up? Let’s try.

Modern thought is that you’re better off with greater range in your cassette and fewer chainrings up front. Sure! It’s lighter and there’s less, “I’m shifting the front. I sure hope this works.” But the gaps between gears are larger. On mountain bike, where chain tension is generally high, I think it’s perfect. On my best day I’m an OK mountain biker, and I’ve never felt like gear ratios were keeping me from more speed/enjoyment/podiums/fame/fortune.

What about road? Personally, I think the 1x movement works on the road, too. If you’re that person with a 12-23 cassette and a 53/39 crank, you might be disappointed by the spacing between gears. I might suggest, after a beer or two, that you’re probably strong enough to deal with it.

Semi-amusing anecdote: two or three years ago I rode a Specialized Diverge on a moderately cryptic route around Specialized HQ. I found myself in a neighborhood on a bike with a 1×11 drivetrain on a road that appeared to be going straight up. It was really hard work. Really. Hard. Work. At the time I blamed the difficulty on the 1x drivetrain. In retrospect, range was not the problem. I was the problem.

Today I own six bikes. One of those bikes has a front derailleur. I can see a day in which there are no front derailleurs in my garage, and that day may well occur in 2018.