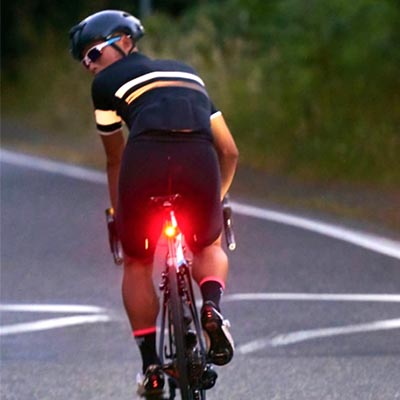 Last summer was a dandy for getting up and out early for a ride. I’ve continued that habit, but the shifting sands of time mean that when once it was a little bit dark, it’s now DARK. As a result, I’ve been trying new things.

In the early summer I purchased a Flare R and have come to believe that it is about the nicest rear light one can use. I have a Flare R City, too. It’s great, but just doesn’t pop like the big guy. Details of this experience are here.

This summer I borrowed the kiddo’s Ion 700 headlight, which worked great. I liked the blinky mode. I liked that it installed easily enough. I did not like the small creaking noise it made nearly all the time. Still, it worked great, charged fast and was conveniently located on the kitchen counter… until the kid went back to school.

Around that time I received Vibe Pro front and rear lights from Light and Motion. They’re motion activated, really small, and pop out of their mounting brackets so you can just put ‘em in your pocket if you stop at the store/bar/whatever. They appear to be designed with a city commuter in mind. The rear in particular works well in all of the situations in which you’d want a rear light and is a valid alternative to the Flare R. At 100 lumens, the front light just isn’t strong enough to punch a big hole in a dark morning or evening, but it has a nice blink and works just fine for riding around the city at a reasonable pace. One thing: the front light has 180-degree visibility, which sounds fantastic. The bad side of this is that it throws too much light back in the rider’s face when it’s really dark. One of Pedal’s employee-craftsmen made a nifty hood out of a piece of inner tube, which completely solved the problem.

Since the kid left with the Ion and the Vibe Pro front wasn’t really strong enough, I unearthed an older Cateye 600-lumen light I bought several years ago. I suspect that the real problem is the effect of age on my eyes, but that Cateye just couldn’t produce enough light for me to comfortably dodge walnuts before dawn. This set of conditions allowed me to feel pretty great about purchasing a light I’ve had my eye on for years: a Light and Motion Taz 1200. L&M calls the Taz a crossover light, meaning that it’s strong enough to use in the woods on your mountain bike, but it’s an all-in-one package, which makes it convenient for commuting. I have but one ride in with the Taz, but it was great. I had it full bore before dawn, then dialed it back to a nice pulse mode once the sun made an appearance.

Yeah, we still have a couple of older lights in the house — those guys that spit out about a billion lumens but have an external battery about the size of a loaf of bread. They work great, but are a bit more of an ordeal to install on the bike, especially if you only need to light the road for 30-45 minutes and are already running late and need to be to work on time. The beauty of something like the Taz or the Ion or the L&M Urban lights is the all-in-oneness. It’s easy to keep track of the one part, and it’s easy to mount the thing to your handlebar or helmet.

Good bike lights have never been less expensive and more effective. It’s a good time to light up the walnuts.