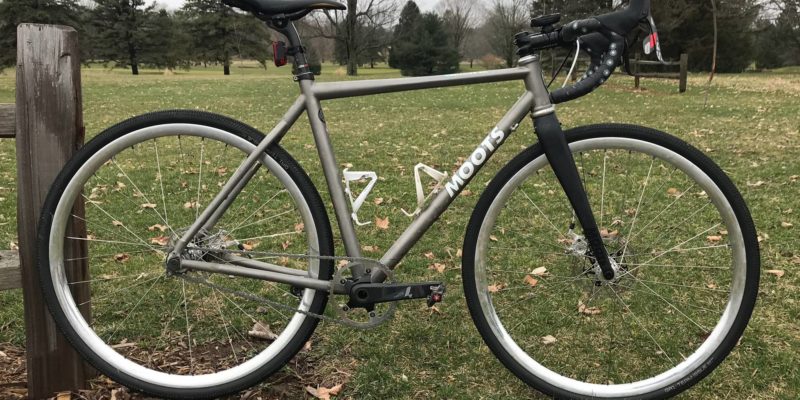 For unclear reasons, I’d been thinking about a single-speed cross/gravel bike. I regret having sold my last one, and didn’t want to spend a pile of money on another. I spent a fair amount of time looking for a new frame, but single-speeding appears to have fallen out of fashion. I found very little to propel the project forward.

One day I realized that my geared cross bike has a PF30 bottom bracket and decided to convert it to single speed. Wheels Manufacturing makes a simple but effective eccentric bottom bracket, which I purchased. I also bought a 40-tooth single-speed chainring, a nine speed chain and really cool bar tape.

I had a bunch of rear cogs and single speed spacer kits from bygone project, and I installed a selection of this stuff to some wheels Kalyn assembled for me. These wheels have super-interesting Onyx hubs; I’ve been looking for an application for them for quite a while, throughout which I ruminated on my former boss who (at least) once purchased a very expensive suit to go with some shoes she couldn’t resist. So it is with me and bicycle wheels.

This project had been banging around in my garage for a few months. What can I say? Busy times. Today I put the finishing touches on this thing, right as the rain quit. I checked my phone, saw that it wasn’t supposed to rain for a few hours and started dressing to ride.

A series of funny things happened in quick succession. When I hit the incline in my driveway, I tried to shift. When I got about a quarter mile from home, I realized that I was wearing regular bibs instead of knickers. I usually cover my knees when the temperature is under sixty. About a mile from the house I realized that I forgot water bottles. I shrugged and kept going.

What a fun time! The bike was fun, but sneaking in a ride between rain showers on an early spring day was the best part. This post was actually inspired by the ride, not the bike, but one isn’t actually possible without the other.