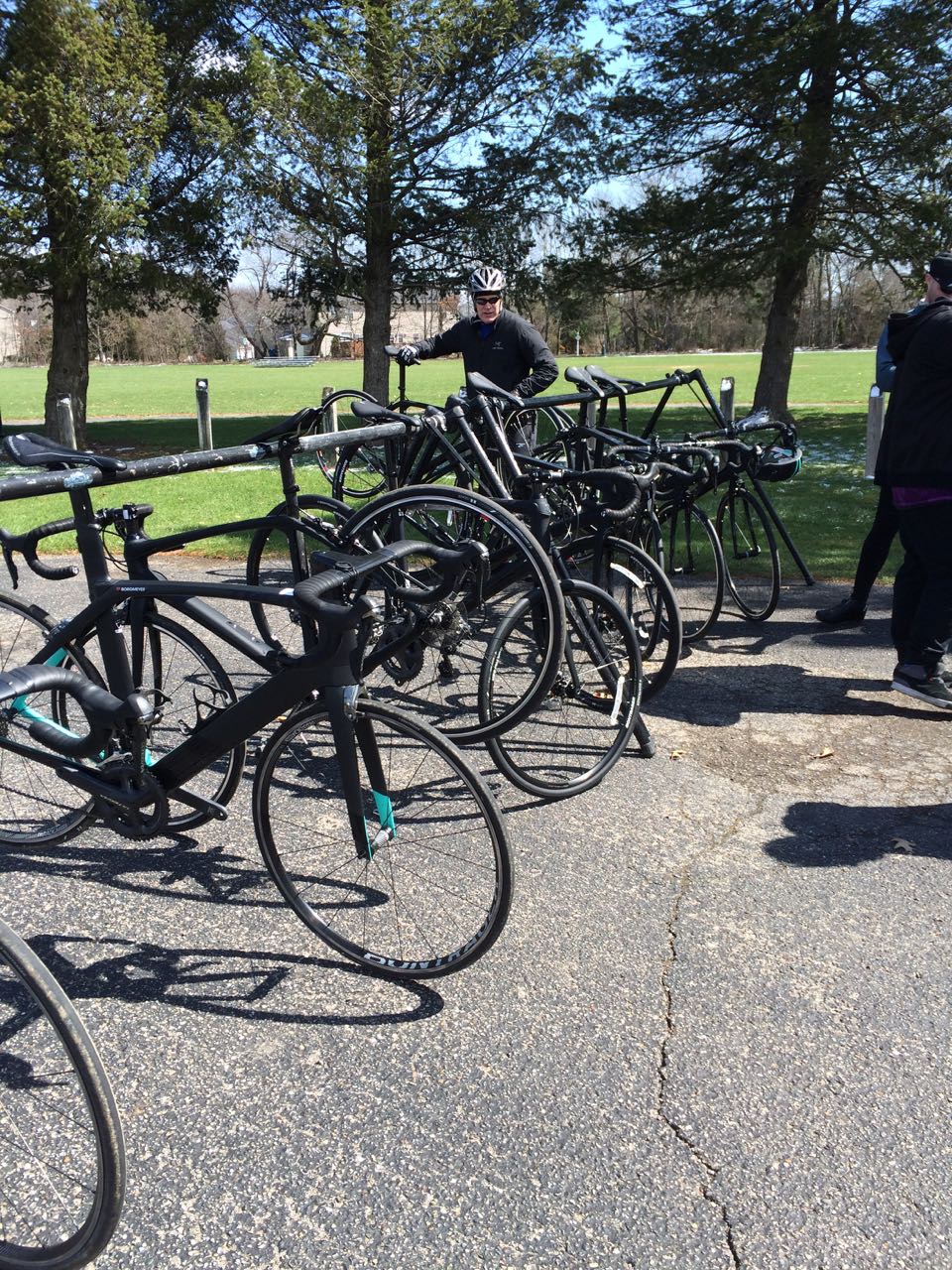 Like many bike companies, Trek makes three carbon road bike frames that can be easy to confuse without a program. The bikes are:

The Madone name has been in use by Trek for almost a decade, the bike it describes has changed quite a lot. Where the Madone (named for a big old mountain pass on which Lance (dare we speak his name?) would test his fitness before the TdF) was once Trek’s only high-performance frame, it is now Trek’s aero bike. The current incarnation of the Madone is sleek and purposeful.

Domane is Trek’s endurance bike. What’s that mean, “Endurance bike?” It means that the frame is designed to be more comfortable for long days in the saddle. This is done in two ways. One is to make the frame less vertically stiff, so road imperfections aren’t passed directly to the rider. The other is to give the frame a more relaxed geometry, with longer chain stays, a shorter top tube and a longer head tube.

Emonda is Trek’s lightweight bike. The Madone and the Emonda share the same geometry, which most of us would call, “Normal road bike.” Whereas the Madone is made to be very slippery and cheat the wind, the Emonda is light and lithe.

So. There we are. Trek came out with this new Madone late last summer and are releasing a fancy update to the Domane today. In an effort to give its dealers a better understanding of the differences between the bikes through hands-on impressions, Trek brought a few Madones and Domanes to Kalamazoo yesterday and allowed us to ride ’em for a bit.

Trek’s interesting IsoSpeed Decoupler first appeared on the Domane a few years ago. In short words, the decoupler allows the seat tube greater flexion, thus smoothing out the ride on the back end of the bike (and the rider’s personal back end). If a complaint was leveled against the Domane, it was that the rear of the bike was considerably more compliant than the front.

Enter the front IsoSpeed Decoupler. Trek took the technology used at the rear of the bike and applied it to the front, allowing the fork’s steer tube to flex and absorb shock and vibration.

And, hey, while we’re doing the front IsoSpeed Decoupler, why not update the rear? The Domane SLR now sports a tunable decoupler at the rear. Without a lot of work, the amount of flex at the seat tube can be modified significantly to suit your individual taste. Pretty fancy.

Alongside all of this decoupling is the trend toward wider tires, which the new Domane supports nicely. The rim-brake bike will take a 28 without problem while the disk brake bike comes with 35mm wide tires. And this brings up an interesting factoid that maybe everyone already knows: disk brake bikes are heavier. We talked with the guy from Trek about weight, and learned that the rim brake Domane (the SLR 6, to be precise) weighs somewhere in the mid-15s while the disk brake version is “a little less than 20.” There’s a lot of stuff in that weight difference: the brakes, the rotors, the shifters, the bigger tires, the bigger tubes, the maybe beefier frame to support disk brakes, the likewise maybe beefier fork.

For 2016, Trek committed to making the Madone extremely aerodynamic without giving up a comfortable ride. How? Yep, IsoSpeed Decoupler. It’s a pretty nifty trick on the Madone: a compliant seat tube inside an aerodynamic seat tube. It works well enough that the Madone boasts the same amount of vertical compliance as the non-aero Emonda (please see program above if all of these names with the same letters has become confusing).

Like Specialized’s Venge, the Madone keeps all of the cable out of sight. Fantastic for aerodynamics. I predict that it’s pretty awful for changing the front bar position. Still: very neat.

I rode two bikes, the Domane SLR disk and the Madone.

The Domane was up first, and it felt really nice. Ultegra drivetrain. Big tires. Hydraulic disk brakes. All the goodies. We rode into the wind, up and down rolling hills and, finally, a flat stretch with the wind at our backs. This is a very nice $5500 bike.

It was when I hopped on the Madone that I realized how plush the Domane felt. The Madone felt more immediate, stiffer and, well, more buzzy through the bars. This is not to say that the Madone was particularly harsh, because it isn’t. It’s just that the Domane is really smooth without being vague.

Charlie’s goal is to hang with (or, even better, lead) the speedy dudes on group rides. While he enjoyed riding the Domane, his heart belongs to the Madone. I told J’son that I preferred the riding position on the Madone, but that I might be singing a different song after 60 miles. Matt J. called the Domane “The Velvet Fog,” which got a few laughs. On a more serious note, he thought the disk brake Domane with big tires could be a fantastic gravel bike or a bike you can ride with no worry about road conditions.

Both of these bikes are at the leading edge of technology, and they are not inexpensive. At $5500 for the Domane and $6000 for the Madone, these things represent a pretty darn sizable investment for just about anyone. At the same time, these are bikes that you couldn’t buy five years ago or two years ago or even twelve months ago. Maybe the technologies represented with the bikes will become commonplace and less expensive. For now, however, these things are unique and expensive and, fortunately, very very real.