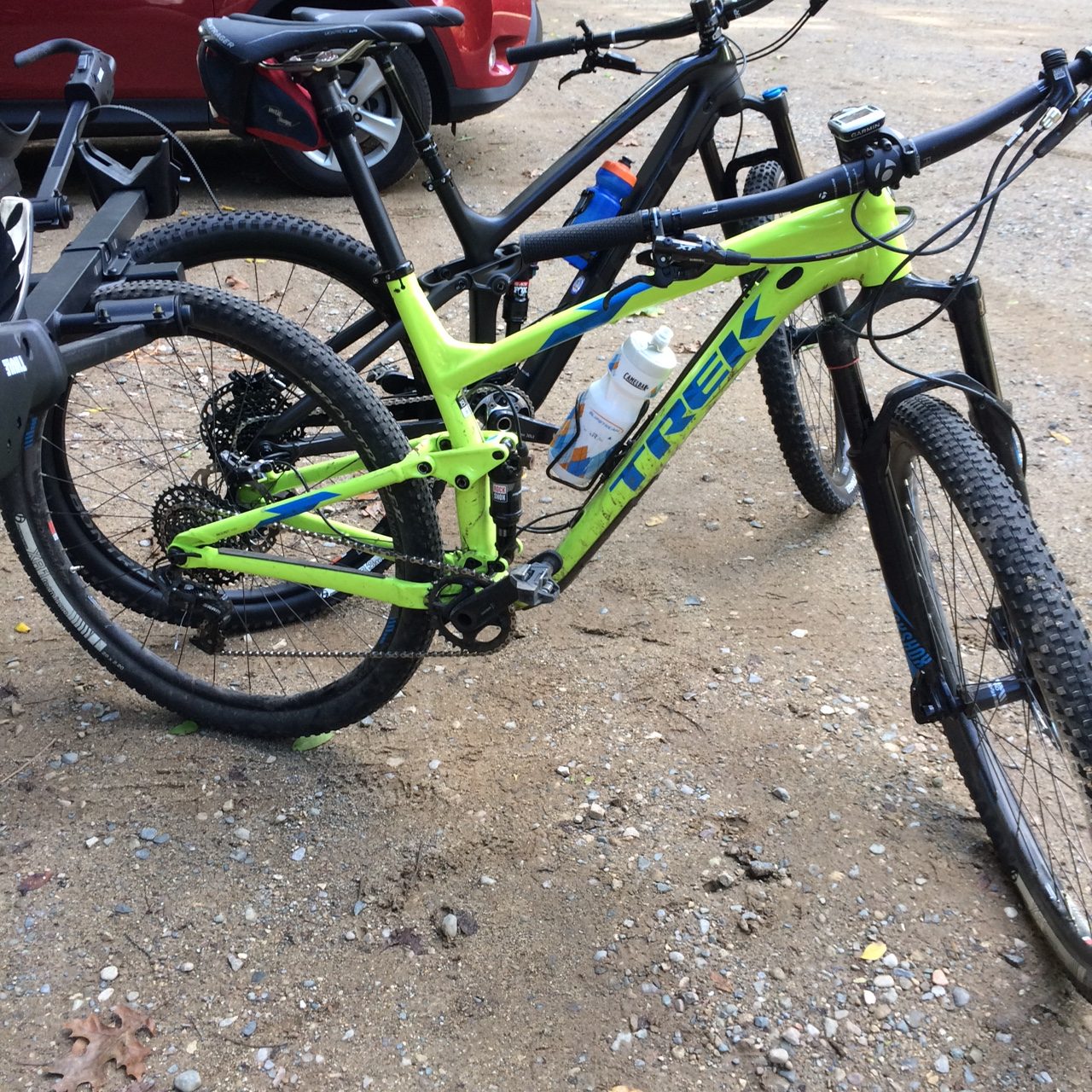 I’m not sure how this dual-suspension thing started, but I can think of three contributing factors:

And yet I find myself the owner of a Trek Fuel EX 9.8, my first carbon mountain bike and my first dual-suspension mountain bike. I picked this bike because it was the most fun of any bike I rode this fall and it represented something new. I almost got a Top Fuel. In fact, I was dithering about canceling my backordered Fuel EX and changing to a Top Fuel when I got notice that the Fuel had shipped. Fuel EX it is!

Let’s clarify things just a bit for the uninitiated. The Top Fuel is a cross country dual-suspension bike. It has 100mm of travel at each end, steeper (quicker) geometry and relatively light weight. The Top Fuel is made for going fast comfortably. The Fuel EX is a trail bike, designed to be something of a jack of all trades — fast enough for a cross country race, but with more travel, weight and security when going downhill or over sketchy terrain. While we live in cross country terrain, trail bikes are the go-to option for many, many mountain bikers.

With my bikes, I can’t leave well enough alone. It just isn’t possible. So I tore off the XT drivetrain and brakes and installed SRAM 1×11 and Guide brakes. I just really, really like the SRAM stuff. YMMV.

One of the downsides of a dual suspension bike is that you have twice as much suspension to dial in compared to a hardtail. Who wants to mess around with suspension setup? Almost no one. Just about every person I know would rather ride on poorly tuned suspension than spend a ride or two figuring out what all those knobs do. Trek makes this a bit easier with a nifty setup tool. The rider enters the bike model, size and the rider’s weight. The tool spits out suggested air pressure and rebound settings. I used this tool (nay, relied on this tool) to get my settings, which I found pretty good. I think I need to make a change to the rear rebound, but we were (can you believe it?) focused on riding and not on suspension tuning. Sigh.

Last night I took it out for its maiden voyage. Ryan came with me, riding the Top Fuel 9 he got last winter and upon which he completed Lumberjack earlier this summer. We weigh about the same, so both bikes work well for either of us. (Yes, it does bum me out that we hit the same number on the scale despite the fact that he’s a few inches taller than me. I take great solace in the fact that I’m considerably older. Not.)

I have a good friend thinking about a new bike, and this is what I wrote him immediately after the ride. Quite possibly I should have edited it (a lot) before sharing with a larger community.

Data points you didn’t expect to get and which might be useless.

Ryan and I rode our bikes tonight, and we switched for a little while just to see what’s what.

This is Ryan’s bike: http://trekbikes.com/us/en_US/bikes/mountain-bikes/cross-country-mountain-bikes/top-fuel/top-fuel-9/p/2138600-2017

My bike is between one half and one pound heavier than Ryan’s. My fork is definitely heavier. I think my wheels are heavier and I know my tires are heavier. Ryan’s bike is aluminum with 100mm of travel. My bike is delicious carbon with 130mm (!!!) of travel.

When Ryan was on his bike and I was on mine, he could (and did) drop me whenever he could put the power down. When it got technical, I could catch back up.

When I was on Ryan’s bike and he was on mine, it was a fair fight. He couldn’t drop me. Period.

What did we learn here? I think rotational weight is a big deal. A huge deal. If you want to win Iceman, get an XC dually. If you want to expand your horizons, get a trail bike. I fell into the latter camp, which is why I got what I got. That said, I was really impressed with Ryan’s (2016) bike.

I think that is all I have in this installment. Other than the fact that I’m probably in the market for lighter wheels.

So those are my thoughts after exactly 20 miles on my new bike. I like it a lot. It’s a huge amount of fun. I will make it a bit more cross country with less rotating mass. More news as I get increased time on the bike.